The world’s smallest heading and gutting machine, Loppa100 from Havfront, was delivered for the first time in 2016 and has become increasingly popular among fishing vessels like Senja, Stormhav, Kågtind and Remøybuen. Havfront has delivered 35 machines since 2016 and receives great feedback from their customers. The interest for a land-based edition has been high, and Havfront is now happy to introduce Loppa200 for land-based facilities.

The whitefish industry is important for Norway, and Havfront sees that increasing the focus on further development and streamlining will be crucial to succeed.
– The new machine will be able to streamline the gutting process by one to two positions and the capacity is 20 fish per minute. We are constantly receiving good feedback from satisfied fishermen and are continuing the work to make Loppa as efficient as possible. For example has one tip led to an extra sensor that can handle fish up to 13 kg. We now feel confident in the technology so we can CE-mark the machine and use it on land-based facilities, says Havfront’s CEO, Marius Strømmen.

A long road from sea to land

Several fish receptions have requested Loppa for use on land facilities, but the regulations for machines on land are very strict and the requirements for operation and monitoring are much more extensive. Loppa200 is like its predecessor small and efficient with its 1,2 meters by 58,5 centimeters. With a weight of only 205 kilos and four screws at the bottom, the machine is potentially movable.
– The adaption of the machine for use on land has taken some time, but now the machine is ready to use, Strømmen explains.

While Kågtind II was the first pilot customer of the seagoing Loppa100, it is Dønna Fiskemottak who will be the first customer for the land-based Loppa200.
– Dønna Fiskemottak wanted our machine because it was small, simple and user-friendly. The machine will be installed in September and will be the first ordinary heading and gutting machine from Havfront on land, which is very exciting for us at Team Havfront, concludes Strømmen. 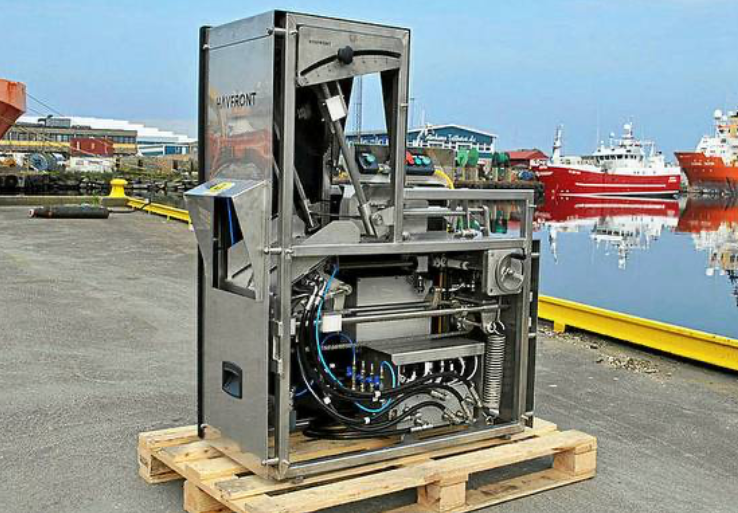